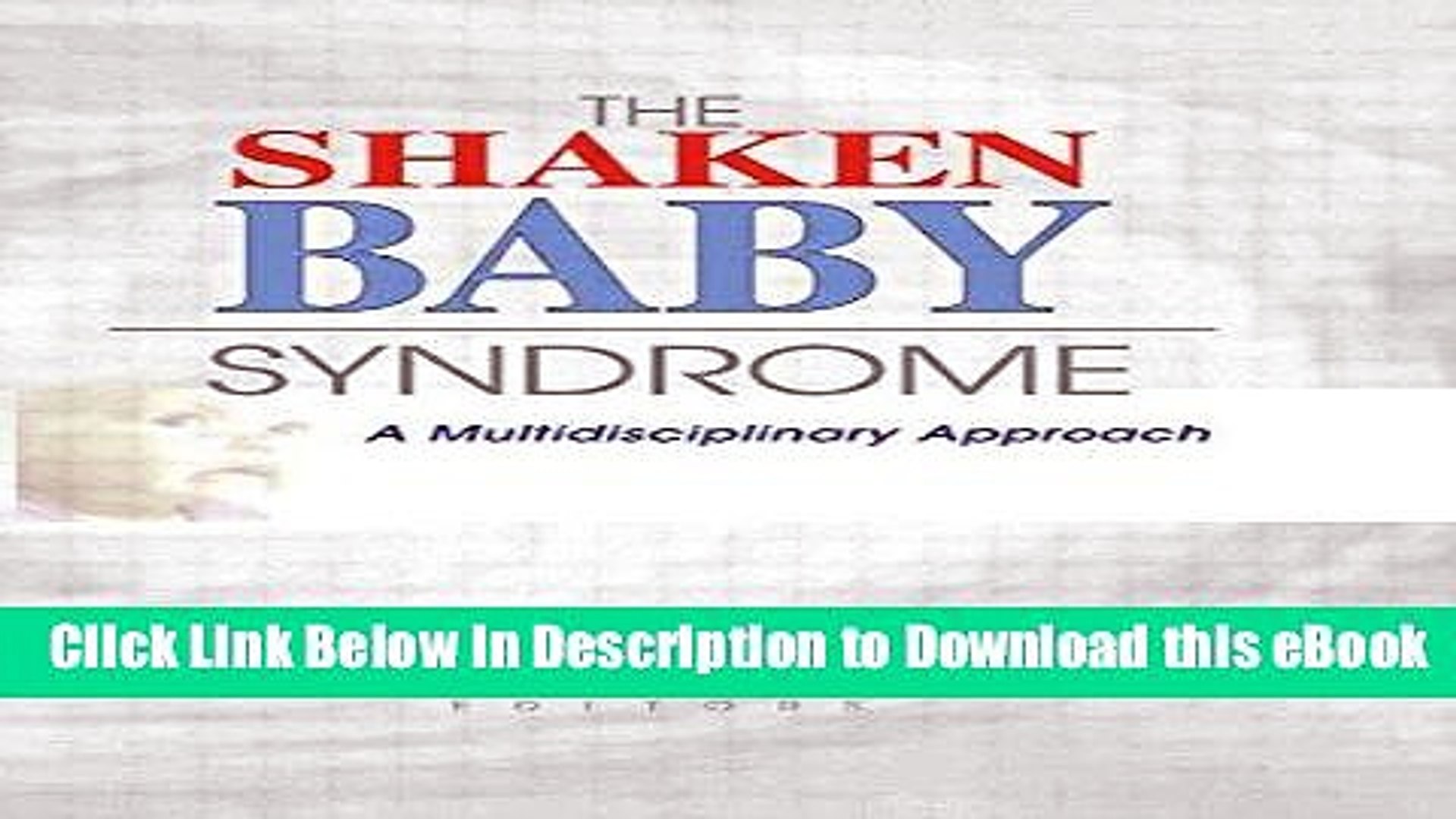 Use the link below to share a full-text version of this article with your friends and colleagues. Learn more. Shaken baby syndrome is not a new phenomenon, with changes in the brains of abused children having been described as early as the nineteenth century. It is, however, a complex condition in which controversies abound.

This introduction to the literature includes both medical and sociolegal perspectives on the history, prevalence and nature of shaken baby syndrome. Both diagnosis and management require a comprehensive, multidisciplinary approach, including input from ophthalmology and radiology. All professionals involved in managing shaken baby syndrome need to be aware of the many debates on the subject, including issues around a lucid interval following the trauma; the degree of trauma required; the mechanism of the injury; and differential diagnoses that need to be considered.

Volume 12 , Issue 6. The full text of this article hosted at iucr. If you do not receive an email within 10 minutes, your email address may not be registered, and you may need to create a new Wiley Online Library account. If the address matches an existing account you will receive an email with instructions to retrieve your username. Child Abuse Review Volume 12, Issue 6.

They did CAT Scans regularly to monitor the damage. By the grace of God, he began to show improvement, he was taken off of life support just before Christmas as he regained consciousness.

By the grace of God, he began to show improvement. It heavily affects the left side of his body. I was blessed to work for a family owned company that never questioned the time off I took to travel back and forth from Indianapolis to be there with Austin, to talk to the doctors, nurses and therapists so I could learn as much as possible about his medical condition and his future needs; or while we took foster parenting classes in record time, so we could be certified when he was released from the hospital on March 16, We just missed that date by two weeks, so Austin was placed with a different foster family while we awaited the official word from the State.

He also had to learn to compensate for the deficiencies his body now had from the brain injury. Austin had to learn to talk, walk, eat, play and even laugh again. He had to build strength and confidence in his every day abilities. He was using a wheelchair that others had to push because he only had use of one hand and one leg. They had to fit both of his feet and legs with orthotic braces to help stabilize his gait when he was attempting to learn to walk again.

He had a helmet to protect his healing brain. He had a feeding tube placed while he was in his coma so they could keep his body nourished. Over the years, Austin has had numerous orthopedic surgeries to help him compensate and or overcome his physical challenges. He has developed permanent hamstring pulls in both legs, simultaneously, causing extreme pain every time he attempted to stand, let alone walk. Thus, he had bilateral hamstring lengthening surgery two years ago.

He has fallen down stairs and broken his right arm, his only useful arm. He struggles to maintain balance and has tripped and broken his left arm. He has peripheral blindness in his left eye, he sees nothing from the left until it is nearly dead centering in front of him; this has caused him to have many collisions with wall corners and doors over the years, but he has also learned to adapt and overcome. He is 17 years old now, a junior in functional skills special education classes.

He struggles every day with depression and extreme anxiety that are common with traumatic brain injuries. Without medication, he would have non-stop seizures disrupting his life and potentially causing irreparable harm to his already damaged brain. He does not drive a car like his typically developing peers, and he can barely walk.

He has typically developing peers who care about him, who have taken it upon themselves to be his friend and mentor within the schools he has attended. Austin has a way of breaking down the walls people put up when someone who is different is around. He makes new friends all over town, every day, with his infectious smile and constant happiness. He just knows how to be happy and loving.

I have taken him to the driving range and taught him to hit golf balls with one hand, he rides the on back of my motorcycle, he plays Xbox and Wii, and can manage an iPad and computer as well as anyone.

He cannot read or write, but can memorize movies line for line and scene for scene after only seeing the movie two or three times. Not a day passes that I am not reminded of that fateful day 15 years ago. There is no closure for Austin or our entire family, there is only moving on and making an effort to do good with the tragedy at hand.

My son Grayson was born on June 23, He came into the world happy, healthy, and beautiful. The summer went by fast and before I knew it my maternity leave was over and I had to return to work. The oldest was 9 at the time, and Grayson was our youngest at 8 weeks old. The presence of the violence Grayson was enduring arrived the day after my first shift back to work.

I was changing his diaper and when I lifted his leg to slide the diaper underneath him he let out a blood curdling scream. I was startled, confused, and clearly concerned. There were no marks, no bruises, nothing.

Grayson had an appointment already scheduled for the next day. The doctor did his two month well child exam and Grayson, he looked amazing. He was growing at a healthy rate, and despite his spit up problems, he was gaining weight well. I told her about his reaction to me grabbing his leg during the diaper change, and she examined him. Again, he let out a blood curdling scream when she moved his leg. My older son had just gotten over hand, foot, and mouth, and the doctor felt very confident that the reaction we were seeing was from joint pain caused by either Grayson fighting off hand foot and mouth, or caused by a growth spurt.

We went home and the next day the doctor called to check on Grayson. His leg seemed a bit improved that day. They asked us if I wanted to bring him back in that day, and I decided to give it one more day to see if it was continuing to improve, and it did continue to improve. I still wonder how differently things may have gone had I taken him in that day. I returned home to the typical chaos and laughter of the 4 older children. I checked his temperature and it was normal. I tried several times to feed, only to be met with fussiness and refusal.

When we returned from dinner Grayson still had not fed, and I spent the next two hours trying to get him to eat. I decided to take him to the emergency room. The doctors examined him. Yet again, he looked amazing. Could be a result of the colic. At that time, we believed colic was behind his occasional fussiness. After an hour we finally succeeded and Grayson slowly took 2 ounces. We were sent home with a handout on newborn feeding difficulties.

After that, feeding difficulties became a regular battle while I was gone, only vomiting soon began to accompany it. We were instructed to follow up with his pediatrician the next day. At this point, I was extremely concerned. Grayson vomited again that evening and again in the morning. When we arrive at the follow up appointment, I was terrified that the doctor was going to confirm my worst fear, that Grayson had meningitis. Given that he was extremely fussy, had the low-grade fever, was vomiting, and a slightly bulging fontanelle she did in fact recommend that we admit him to the hospital and do a spinal tap to check for meningitis.

Abusive Head Trauma: An Overview for the Multidisciplinary Team

The thought of losing him devoured me in a matter of seconds. When we arrived the first thing they did was take a blood sample for testing. After reviewing those test results the doctor decided to do an MRI before we continued with the spinal tap. It was this decision that finally unveiled the monster hiding in the shadows. X-rays were ordered, and uncovered 10 bone fractures, all various stages of healing.

My eyes zoomed in on the right femur fracture. My God, how did I miss that? Grayson had several more tests done, and after four days the doctors said the blood in his head and broken bones will heal on their own. With a full criminal investigation underway, and child protective services case opened, we were sent home. We never returned to our house again. Three days after being released Grayson began having seizures. After another MRI they discovered that the bleed had evolved, and the seizures began to piggy back. One after another after another. We were again flown to Doernbecher where Grayson underwent brain surgery to remove the blood, and received a blood transfusion.

That same day his father was arrested and charged with 12 counts of 1st Degree Assault. His will to overcome and courage to survive has brought a new meaning to life for him, and for his family.